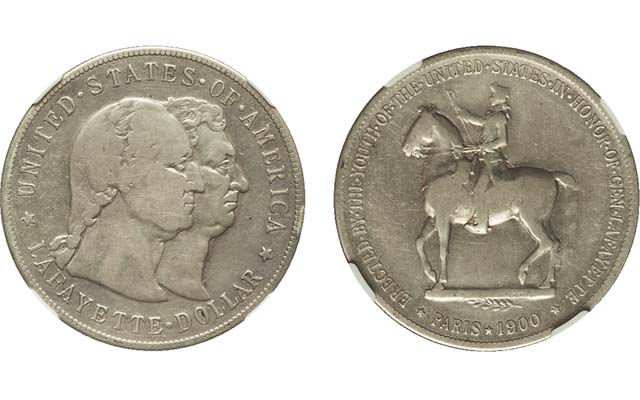 A Fine 12 1900 Lafayette Monument commemorative silver dollar sold for $223.25 at a 2013 Heritage auction, making it among the most affordable examples of this generally pricey issue.

The 1900 Lafayette Monument dollar is the sole silver dollar in the classic era commemorative series. While the denomination would be popular upon the revival of the commemorative program in the 1980s, the high face value at the beginning of the 20th century made it an expensive keepsake.

Still, 36,026 1900 Lafayette dollars were distributed and many saw light circulation. The obverse shows the heads of George Washington and the Marquis de Lafayette and the reverse depicts an equestrian statue of Gen. Lafayette. They were originally sold by the Lafayette Memorial Commission for $2 each, and today even lower-end Mint State examples approach $1,000 in price.

This evenly circulated representative grading NGC Fine 12 is the only one certified in this grade by NGC. It sold for $223.25 at a Feb. 23, 2013, Heritage auction. At this price level, it is among the least expensive examples of this interesting coin to come to market in years.