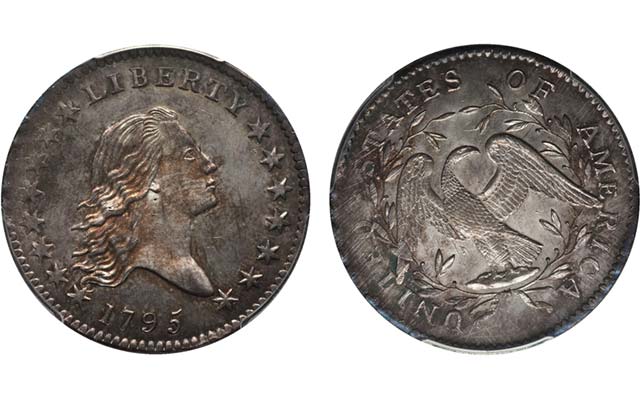 Selling for $141,000, the top 1795 Flowing Hair half dollar at the 2015 CSNS auctions was an O-129 variety graded Mint State 63+ by Professional Coin Grading Service with a green Certified Acceptance Corp. sticker indicating quality within the grade. The variety is distinctive in that the second S in STATES on the reverse is punched over a D and the variety is visible in even low grades.

This example is likely the finest known, and Heritage notes that only three examples have been offered recently in grades finer than Extremely Fine, including one grading Mint State 61 that did not meet its reserve at an August 2014 Heritage auction.

The reverse shows planchet adjustment marks, which were on the planchet at the time the coin was struck, and Heritage reminds bidders, “The adjustment marks and associated weakness are strictly a result of the minting process and have no affect on the grade of this extremely important and likely finest known half dollar.”