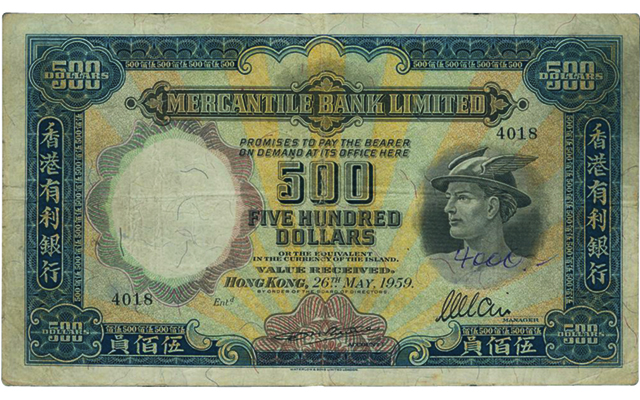 The 1959 note, graded About Fine by Spink, features a vignette of the god Mercury at right on the face and a water mark of the numeral 500 to the left. The back shows a vignette of a “paifang” (in Chinese architecture, a gateway or archway) in the center.

This design was issued only in 1948 and 1959. The note “is the scarcer date of an already rare issue,” according to the catalog.

Also in the auction, a 1904 stock certificate for $20 worth of shares in the China Mercantile Co. sold for $100,000 in Hong Kong funds, or $12,902 U.S. The certificate is described as having “folds and wormholes but still very attractive, Very Fine, and very scarce,” according to the catalog.

For more information about the auction or upcoming auctions, visit the Spink website.