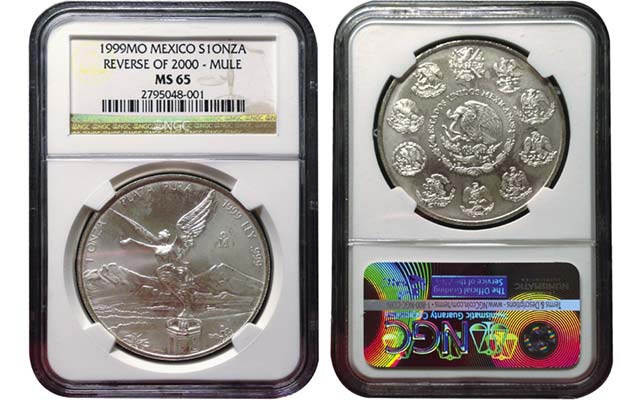 A 1999 Libertad 1-ounce silver bullion coin has been certified as a “mule,” featuring the obverse design, shown above, that officially debuted in 2000. 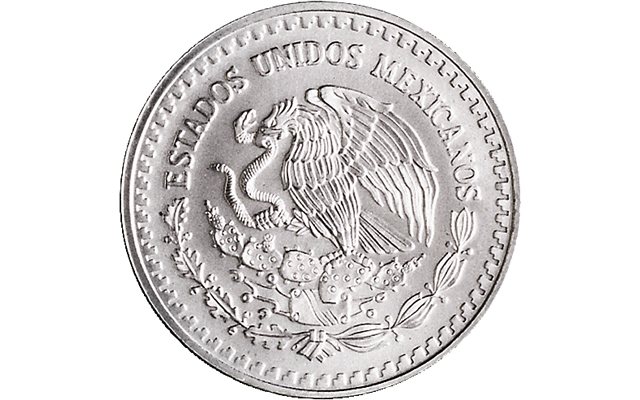 The correct obverse for the 1999 coin features the familiar, longstanding design of an eagle with a snake in its mouth on a cactus.

Image courtesy of the Bank of Mexico.

Nearly 16 years after it was first issued, a 1999 Mexican Libertad silver bullion coin has been authenticated as bearing the wrong design.

The coin that Numismatic Guaranty Corp. is calling the 1999 Reverse of 2000 coin was recently authenticated by NGC. Though NGC describes the coin as bearing a “Reverse of 2000” design, the Bank of Mexico considers the side NGC calls the reverse — bearing a new rendition of the national coat of arms introduced in 2000 — to be the obverse.

The coin is the first 1999 Libertad 1-ounce silver coin to be declared a “mule,” meaning that it was struck from dies that were not intended to be paired together.

The coin was struck using a 1999-dated reverse die showing Winged Liberty matched with an obverse die that was intended for use on the 2000 Libertad silver 1-ounce coin, or “onza.” In 2000, Mexico adopted a new obverse for the Libertad coins, one showing multiple emblems encircling the longstanding, familiar eagle-with-snake-on-cactus design instead of just the central coat of arms by itself.

Dealer Pat Stovall, of U.S. distributor Lois & Don Bailey & Son Numismatic Services, told Coin World about the mule error. A client of his, concerned that he had a counterfeit coin, submitted it to Stovall for submission to NGC, he said.

“NGC has never graded one before and everyone I have mentioned this to has never heard of one,” Stovall told Coin World. “I would call it a new discovery.”

The collector bought the coin from dealer Don Bailey when it was first issued. Stovall said the collector noticed the difference and kept mum about it, not knowing if others might show up at a later date. Stovall now leads Lois & Don Bailey & Son Numismatic Services.

After 15 years, without another example to hit the market, the owner brought the coin to Stovall.

“I suspect it was a test piece, not meant for circulation,” Stovall said.

As for whether other examples may exist, Stovall said, “You would think if somebody had a coin like that they would submit it to one of the grading firms to be authenticated, because to look at it you’d think it would be counterfeit.”

Stovall will offer the so-far unique error for sale in an upcoming auction venue, he said, but those plans are not finalized.

The reverse of the first series of Libertad coins displays the Winged Victory statue that appears on the Mexican Independence Victory Column in Mexico City. A landscape with two volcanoes is in the background. The Mexican eagle on cactus coat of arms appears on the obverse of this version.

The reverse design on the first series of Libertad silver bullion coins was replaced by a new reverse design of the Winged Victory, showing the same basic design elements but depicted from another angle.